Paintings > Landscapes in Oil and Acrylic 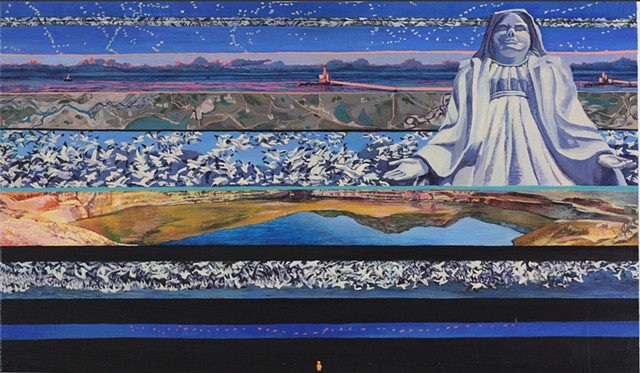 A “hyperobject” narrative solution to my Berkeley Pit experience.

Three days into the trip, east of the Continental Divide, we paused for two nights in Butte, Montana waiting on parts and service at the Subaru dealership. Dehydrated, sunburnt, and stuck in the midst of the commercial district of Butte, I searched the horizon to orient myself to the historic downtown Butte. I noticed a monumental statue on a hilltop overlooking the town. Upon inquiring, I learned from the friendly locals that Butte has a recent history of miracles for which members of the community built a monument to the Virgin Mary. The extended visit allowed me to explore the historic mining town, including Berkeley Pit where mining activity continues in the vicinity. I was compelled to create a “hyperobject” narrative solution to my Berkeley Pit experience.

The Berkeley Pit quarry pond is one mile long by a half a mile wide by 900 feet deep and is one of the largest superfund site operations in the United States.

Since the mine closed on Earth Day in 1982, the pumps within the mine were turned off allowing water from the aquifer to drain into the shafts, filling the tunnels and then the quarry pit, creating the pond. The exposed metals and minerals in the quarry walls and mine shafts are in a constant state of chemical reaction with the molecules of water creating a toxic heavy-metal liquid compound. Berkeley Pit water is poisonous to drink, and the toxins are readily absorbed through the skin and mucus membranes of all human and non-human creatures. But the threat does not end there, as the water level rises in Berkeley Pit, it comes ever closer to the level of the water table. When this equilibrium occurs, the toxic water will drain back into the underground aquifer and contaminate an entire watershed at the headwaters of the Columbia River. Scientists and engineers have maintained the pond level by pumping and diverting the poison water into Silver Bow Creek, an interconnected superfund site. It was ALL complex, beautiful, abject, mind-bogglingly sublime: Local residents in Butte witnessed to me about miracles, and I personally witnessed the prophetic omen of a superfund site and prayed for miracles.

Later in the fall of 2016, back at home in Alabama, I saw a byline about Berkeley Pitt reporting that a flock of thousands of snow geese migrating from their summer grounds at the northern-most edge of the continent were forced to fly south out of season because of an especially strong storm approaching from the north. The unusual intensity and unseasonal occurrence of the storm was attributed to climate change. The article suggested that the storm disrupted the flock out of their usual migratory pattern and set them on a course that intersected with Butte, Montana.